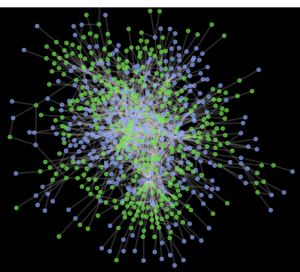 As part of the BioCreative V competition, Daniel developed software to find chemical-disease relationships in PubMed abstracts. I’m going to describe a proof-of-concept that uses that code to identify new relationships extracted from the literature. This could be useful both for finding new adverse drug affects and for finding new therapeutic applications.

Daniel ran the software over all PubMed abstracts in high-precision mode and found 1392503 putative relationships (of which 282604 were unique). To begin with, I looked at the most common relationships found. However learning that “alcohol is associated with alcoholism” and “cyanide is associated with poisoning” is not super-useful. It is unfortunately the case that the information about which you can be most confident (i.e. it is found multiple times) is also the least useful as by definition it’s already well known. Although actually I didn’t know the top relation found, that “streptozotocin is associated with diabetes”; it turns out that streptozotocin is used to produce an animal model for diabetes.

Really what’s most interesting are novel relationships, ones that haven’t previously been described. To find these I looked at any relationships attributed to this month (i.e. Sep 2015 at the time of writing) or later that were not in earlier abstracts. This gave 847 relationships. When I looked at the sentences associated with these relationships I found that 6 of them explicitly stated that this was the first report of a particular interaction and that in each case we identified the correct relationship.* (Just for interest, I searched the “known” relationships from September for similar phrases stating that they were the first report, but did not find any.)

Then there are mentions of novel compounds, but I guess there are different degrees of novelty:

A number of other relationships mention potential as a therapeutic agent:

The Comparative Toxicogenomics Database (CTD) contains curated and inferred chemical-disease relationships (among other data) and is freely available to download. The latest update is from Aug 2015 and appears to contain 89039 unique curated relationships and 4.0 million inferred ones (I note that these figures do not agree with the ones reported by CTD so I could be mistaken).

If the novel relationships from Sep 2015 are filtered using the curated CTD set, 813 remain and none of the results above change (note that I didn’t take any advantage of the MESH hierarchy for this proof of concept). Of these, 254 are present in the much larger CTD inferred relationship set. Interestingly, the link between toxic epidermal necrolysis (TEN) and paraquat, first reported in Sep 2015, is one of these.

Hopefully the above discussion and results show the potential of this approach. To do this properly would probably require more work on the text-mining to target therapies (this was outside the scope of the BioCreative V competition) and a manual assessment of the quality of the results. If you’d like to collaborate on this, get in touch.