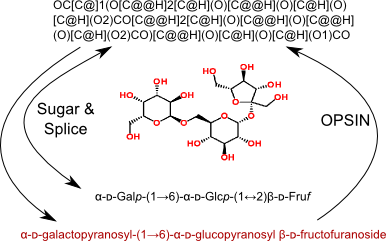 Below is the effect this improvement to OPSIN has had on the conversion of IUPAC names in ChEBI. (This is one of the data sets used in the OPSIN publication [free access])

OPSIN 1.4.0 is available from Bitbucket and Maven Central. The full release notes are below: The vast majority of amino acid residues that appear in peptides and proteins appear as their natural L-form enantiomer. This is the form of all amino acids as translated by the ribosome. However post-translational modification, such as by racemases, or peptide synthetic methods can be used to introduce the mirror image D-forms of amino acids into peptidic compounds.

In the RCSB’s PDB file format, three letter residue codes have been assigned for both the L- form and the D- form of the traditional 19 amino acids other than glycine. Glycine (PDB residue code GLY) has an achiral α-carbon and therefore does not have an L-form and a D-form. For convenience, the table below lists the correspondence between PDB’s three letter codes for these amino acids.

The above table is believed to be the only internet resource conveniently linking the two PDB residue codes for enantiomeric forms of amino acids.

Image credit: The Joneses (where are the joneses on Flickr)