The term patent family is generally used to describe a set of patents that cover the same invention but which are filed with different patent authorities. Here instead we look at finding groups of patents within a single authority (the USPTO) where the patents are linked by chemical structures.

It turns out that it is not unusual for essentially the same chemical information to appear in multiple patent applications within the USPTO, often with the same or similar title. I’m not sure of the reason for this – perhaps corrections, rewrites, or separate applications for different targets. In any case, it is useful to identify such cases for the purposes of linking or collation, or indeed to discard if looking for truly novel chemistry.

Here’s an approach that appears to work reasonably well: we regard as “chemically-related” two patents that share at least N key (but rare) molecules in common. All that remains is to define “N”, “key”, and “rare”:

Naturally, these cutoffs could benefit from some tweaking with a testset (e.g. patents with the same title and assignee), but for the purposes of this blog post they seem to work well. Here is a typical example of a highly-connected chemical patent family, where the labels are the number of key (but rare) molecules in common: 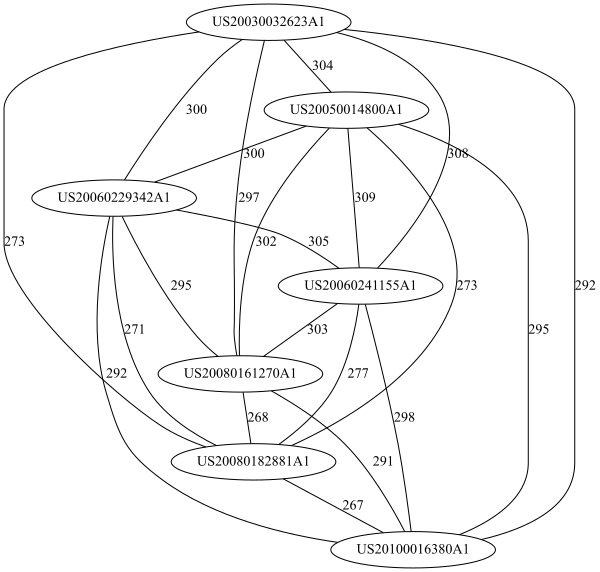 These patents appear to be all from Santen Pharmaceutical Co., though the company name is not listed as assignee on some of the patents. Equally interesting are those related families where the members are less highly connected. Here’s an example from GSK along with representative examples of the patent titles:

As ever, if this sparks some ideas and you’re interested in collaborating, drop us a line.