A simple example would be CHF3 which is

Line formulae are interpreted from left-to-right, but in such a way that valency rules are respected e.g. the fluorine in the above example bonds to the C not the H. 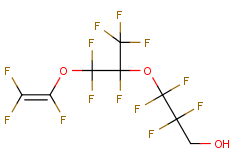 This is useful for pulling out reagents of chemical reactions and where the described compound is important in its own right.