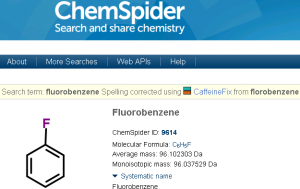 In collaboration with ChemSpider, CaffeineFix technology is now being used to make suggestions whenever a ChemSpider user’s query doesn’t match a synonym in ChemSpider.

CaffeineFix enables the correction of text to match entries in a dictionary or those expressed by a grammar/regular expression.

The system considers 4 correction operations: insertions, deletions, substitutions and transpositions. To improve the ability to distinguish likely from unlikely errors, the cost of these operations is parameterised by the context they are found in.

For example pyrole is one edit away from both pyrrole and pyrone but the correction to pyrrole is used as it is far more likely.